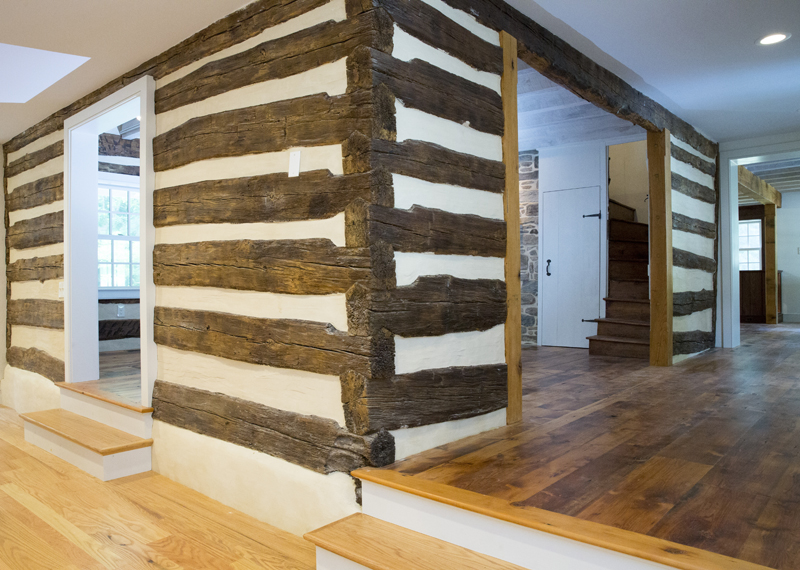 Gustav Stickley, noted furniture manufacturer, design leader and chief promoter of the American Craftsman style, believed “there are elements of intrinsic beauty in the simplification of a house built on the log cabin idea.”

Stickley would be proud of a new home built in Sparks, MD that “envelops” a log cabin – preserved and restored to its original grandeur. As the photos show, the preservation of the salvageable sections of this historic two-story 680 square foot log cabin, dated 1820, are now encased in the 3,000 square foot vernacular farmhouse-style home. The painstaking process began with deconstruction of the exterior finishes and original chinking.

The logs were cleaned of the old plaster and the space between the logs occupied by the chinking was replaced with blocking. In these spaces, modern wiring and insulation were installed. Plaster lathe was installed over the blocking and the chinking plaster was replaced with a mixture coating of mortar and lime and then sealed. The “cabin” is used as a dining room with original fireplace on the first floor and a private office on the second.

In addition to the restoration of the log walls, original ceiling beams were used, flooring reclaimed from the deconstruction was installed and many original elements were included in the final preservation. Exterior windows are new but an original cabin window was left in place at the second-floor gallery hall and for an architectural detail within the cabin.

Master craftsman Elmer Suieck provided the nearly extinct art of mortar and lime plastering and the result speaks for itself – as the final product proudly showcases how the cabin may have looked in 1820. The addition of period furniture, artwork and historic elements completed the project to a level that everyone associated with this hallmark restoration was extremely proud to tour.

Takeaway: “Begin with the end in mind and resist the temptation to follow the crowd.”